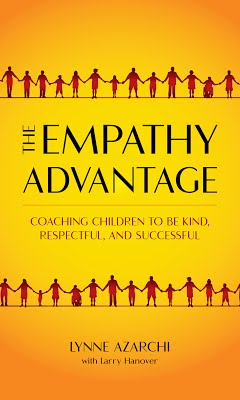 Bullying and cyberbullying is on the rise.  Face-to-face interpersonal skills are declining.  Narcissism is increasing.  Not only do studies show these distressing facts to be true, but we see them in the news and in our own lives.  Lynne Azarchi, Executive Director of Kidsbridge Tolerance Center, has the answer to these growing problems:  teaching our children empathy.  In her new book, THE EMPATHY ADVANTAGE:  Coaching Children To Be Kind, Respectful and Successful (Rowman & Littlefield; November 4, 2020), Azarchi provides the tools and strategies families can use to give their kids the gift of empathy – simultaneously setting them on the road for a more successful future and changing the world for the better.

My empathy could have gotten me into serious trouble as a kid when my uncle took me to a Yankees game in the Bronx. I was having fun until the crowd started to boo the opposing team. I asked my uncle why the crowd would do that. “There is no reason and it isn’t nice!” I protested. His eyes widened and he gave me a funny look, at which point I realized I may have been just about the only Yankees fan with that line of thought. Fortunately, I didn’t voice my concerns to anyone but my uncle, because other fans might have gone bonkers!

Then, in my twenties, the movie Halloween (1978) came out. I felt like I was those poor young female victims, and that was just from hearing about the movie from friends and seeing the trailers. A masked slasher hacking teenagers to death and dismembering them, with blood and gore everywhere? Why would anyone want to see such a film? I never did. That was way more than I could take.

This innate sense of reacting to what others feel and understanding it in my bones isn’t confined to the world of Hollywood make-believe or sporting events. When I get my morning New York Times, I rip out upsetting photos of children in distress and tearful victims of hurricanes and earthquakes so that I don’t have to look at them more than once. I know it sounds like an overreaction, but that’s how I am wired.

In 2017, I had the opportunity to go to Poland and visit the concentration camps, including Auschwitz-Birkenau. Many of my relatives were murdered there by the Nazis, so when I saw the rooms full of hair, thousands of spectacles and suitcases, and other personal items, I took it very personally. I had not expected to look like the photos of many of the female victims, and yet at Auschwitz-Birkenau and all the other museums and exhibits, in my mind, I did. I was overwhelmed by visions of what bystanders could do to other people with wanton cruelty, sadism, and inhumaneness. For two months after I got home, I awoke in the middle of the night with my heart racing and my body shaking from dreams about my visit to a horrific time and place.

But please don’t get the impression that being the Empathy Woman is all bad. Yes, it can be a curse in some instances, but it is also a blessing. It has made me who I am today, a person who volunteers for numerous organizations and is warmed by the glow that comes from helping others. No amount of money could buy all those smiles. Most significantly, it led me to become executive director of the Kidsbridge Tolerance Center outside Trenton, New Jersey, working full time on a labor of love: teaching children, youth, and educators about empathy and empowerment, respect, and kindness.

Granted, I am living proof that people can be hyper hardwired for empathy. (There’s even a technical term for my “condition”; it’s called being an empath.) And yes, I accept that I’m a rarity. Simon Baron-Cohen, a professor of psychology and psychiatry at Cambridge University, suggests we place people on an empathy spectrum or quantitative scale. This empathy spectrum or scale would follow a bell curve, meaning that some people have a small amount, some a medium amount, and some a lot.  That’s me—a lot.

Almost two decades ago, when I started this work, I read that empathy could not be taught. But I heartily object to that assertion: empathy can be taught. I am living proof that it can. I’ve taught it to more than thirty thousand youths and their educators at Kidsbridge, with an average of twenty-three hundred kids and two hundred educators coming through every year. Note the dashed line above the bell curve line in the figure; empathy can be increased at any level.

And parents, I can teach you.

In fact, you can teach empathy to your children, whether you spend just twenty minutes a week or two hours. No, this isn’t a cure-all. But just a little effort, using proven and effective methods, with a dose of fun, can transform your child into a more sensitive, caring human being. I am an empty nester now; my children Rachel and Jake are both out on their own. But if I had known then what I know now, I would have tried to inspire them with empathy more often, more consistently, and more strategically. I would have closely followed the steps, tips, and strategies that you will read in this book. My kids would have more empathy and would have been better prepared for the future to function both as individuals and as part of a team.

Giving your children the gift of a new video game or smartphone may give them a little enjoyment in the short term—OK, “little” is a big understatement. Seeing a favorite pop star in concert or going to the Super Bowl might be the thrill of a lifetime. Over the years, though, what will that mean to their development as human beings? What do parents really, really want for their children?

You want them to grow into caring adults who enjoy lasting, loving relationships and close friendships. You want them to be able to support themselves and work well with others.

You want children who not only run to see what their birthday presents are but also run to the homeless shelter or a children’s hospital because there’s a child somewhere whose parents couldn’t afford toys for the holiday. You want your kid to grow up to be a mensch, a Yiddish word for a good person or a good soul.

That’s why we need to teach empathy. It’s an ability that enriches an entire lifetime.

This is an adapted excerpt from THE EMPATHY ADVANTAGE:  Coaching Children To Be Kind, Respectful and Successful by Lynne Azarchi, published by Rowman & Littlefield.  © 2020.

LYNNE AZARCHI, author of THE EMPATHY ADVANTAGE, is Executive Director of Kidsbridge Tolerance Center outside of Trenton, New Jersey—a nonprofit organization dedicated to fostering bullying prevention, anti-bias, diversity appreciation, empathy, and empowerment strategies for youth.  She is a tireless advocate for improving the lives of at-risk youth in communities across New Jersey. Kidsbridge helps more than 2,500 preschool, elementary, and middle school students and educators improve their social-emotional skills each year.  Azarchi has won many awards and her articles have been published both in newspapers and academic journals.  She is a frequent speaker to parent and teacher groups, corporations and major educational conferences.