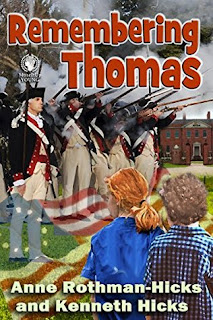 Jennifer and James and their two friends, Kaytlyn and Sleepy, step through a time portal in the vicinity of modern-day Kips Bay and find themselves caught in the middle of a Revolutionary War battle. Their purpose is to stop the evil Malman, who wants to change the course of history by altering an event that occurred at the Battle of Harlem Heights. Their task is complicated by a man, Arthur Whitehair, who was turned into a pigeon by the misreading of a spell many years before.

During the course of twenty-four hours, the foursome meets the genteel Mary Murray and her daughter, Susannah, credited with delaying the British and allowing the rebels to escape. They share the camp of Margaret Corbin, who fought with the rebels and was injured. Their lives are saved by swashbuckling Major Aaron Burr. They encounter Thomas Knowlton, the hero of Bunker Hill, who died at the battle of Harlem Heights. And, finally, Jennifer discovers the joys and pain of first love with Frederick Knowlton, the sixteen-year-old son of Thomas.

Remembering Thomas is a sequel to Things Are Not What They Seem. As in that novel, the four friends learn lessons about love, friendship, and self-sacrifice.

I loved the eclectic group of friends we get to follow in this story. They each had very distinct personalities and I liked the way that they interacted with each other. The way they were written really helped to highlight each one.

What a wonderful historical ride we get to take. It's valid in its representation of history, but also written in a way that is easily enjoyable for those who attention spans may be a little be shorter. The younger generation isn't always interested in historical events of their own free will, but I think stories like this really help to grow their curiosity of the past.